My Cushing’s story started long before I realized it was being written. It is hard to say exactly when I exhibited my first symptom, but looking back at pictures, I began displaying a rounded “Cushing’s face” during my undergraduate studies in the late 1990s. I began dealing with minor anxiety at that time, but that didn’t seem too abnormal given my busy and intense schedule. 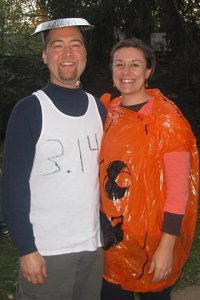 My Cushing’s story started long before I realized it was being written. It is hard to say exactly when I exhibited my first symptom, but looking back at pictures, I began displaying a rounded “Cushing’s face” during my undergraduate studies in the late 1990s. I began dealing with minor anxiety at that time, but that didn’t seem too abnormal given my busy and intense schedule.

As I moved on to graduate school in the fall of 1999, I began having some skin issues, again nothing too out of the ordinary. In the fall of 2000, I became sick and unable to eat, which eventually was diagnosed as a failing gallbladder, which was removed at the end of that year. Although it’s unclear whether there is a connection between Cushing’s and my gallbladder issues, that was the first of many significant health issues I encountered over the next 13 years.

After finishing graduate school, I began a consulting job and began dealing with more anxiety and started having difficulty sleeping. Again, I attributed those problems to the early years of my career and the pressure of trying to work my way up the corporate ladder. At this time, we discovered that I had high cholesterol and triglycerides. I was young, careful with my diet, and exercised regularly, but since heart disease runs in my family, this was attributed to being “in the genes”. Another unexplained issue that arose in the mid 2000s was a discoloration of the skin on my shins and lower legs. My doctor checked me for diabetes and a few other things, but when those tests came back negative, he decided that while it was weird, it was probably nothing to be worried about.

As time marched on, my “Cushing’s face” continued to become more prominent, and I developed what is known as the characteristic “buffalo hump” that forms on the back of the neck of Cushing’s patients. I fought weight gain in my mid-section despite careful eating and regular exercise, and also noticed I was losing strength and muscle mass. It was becoming difficult to get out of chairs or to walk up stairs. The skin all over my body would bruise easily, and the bruises would take weeks to go away. The skin on my legs became very thin and sensitive. It would tear open at even the slightest bump.

The severity of this problem was put on display in 2011 when someone’s heel inadvertently kicked my shin during a game of pick-up basketball.  The skin on my shin peeled back like paper. Although it hurt, it didn’t hurt as much as it should have. It was as though the skin was already partly dead. The wound care specialist tried a variety of methods to facilitate the healing of my leg, but progress was slow and almost non-existent. By this point, I was experiencing joint pain and random achiness, increased facial skin problems, prematurely thinning hair, and sleeping was a continual struggle. As my list of symptoms grew and answers were still unavailable, I began to struggle with feelings of depression.

In April of 2012, I got a MRSA infection that hospitalized me for almost a week. A month after getting out of the hospital, I had an unexplainable flare up of swelling in my ankles and legs and excruciating pain. I spent another week in the hospital where I was seen by a number of teams of specialists and underwent a good number of tests, none of which explained my issue. I was placed on steroids to reduce the swelling and sent home with another question mark added to my chart.

A few months later, I bumped my leg against a car door, the skin split open, and within days I had another MRSA infection. After a few days in the hospital, this was under control and I was sent home again. I knew something was wrong with me, desperately wrong. I felt like I was falling apart in every aspect of my health, and I was living scared of what would pop up next.

Search for Answers and Hope

Shortly thereafter, I had sharp pain in my knee that wouldn’t go away so I went to see my doctor. My normal doctor was unavailable, so I was seen by another doctor at the practice. As she looked over my medical history and my extremely round face, she asked me if I would mind urinating in a jug for 24 hours to check on something. I was desperate for any answers, so I said I would be glad to.

I remember exactly where I was in 2013 when I received a call from her informing me that my cortisol levels were about 8 times higher than a normal person on their most stressed day. She said we’d need to do some more tests to make it official, but she was pretty sure that I had something called Cushing’s Disease.

Even though I didn’t know anything more about Cushing’s Disease other than the assurance that “it was treatable”, I felt a huge sense of relief that there was an explanation behind my mysterious medical history. There was hope.

I was then introduced to my endocrinologist, Dr. Kharlip, who directed me to get a brain MRI. The MRI showed a potential tumor site on my pituitary gland. To confirm the tumor’s existence and location, I underwent a procedure called Inferior Petrosal Sinus Sampling (IPSS), which conclusively demonstrated that the tumor was where the MRI hinted it was. I underwent a transsphenoidal adenomectomy in June of 2013 to remove the tumor. My cortisol and ACTH levels plummeted to nothing immediately and the surgery was deemed a success. I healed physically from the surgery over the next month and took hydrocortisone as a replacement for the cortisol that my body was now unaccustomed to producing since the tumor had been removed.

Reestablishment of normal cortisol production was slower than hoped, but by January 2016, my body was back to normal and I was able to stop taking hydrocortisone as a cortisol replacement. It seemed that my long battle for normalcy was finally over.

After talking with doctors and other Cushing’s patients, I’ve come to understand that once you’ve had Cushing’s, you’re always being monitored to make sure that it does not return. As such, the routine is to have your cortisol levels checked every six months. In September 2016, I received troubling news. My cortisol levels were high again. Not as high as before, but definitely beyond a normal value. A second test confirmed my fears – Cushing’s had returned. Not wanting to see my health deteriorate as it had before, we quickly did a brain MRI to search for a tumor that could be surgically removed. However, the results showed nothing conclusive and the only abnormality seen was at the site of the resection of my original tumor, which quite possibly could be scar tissue.

In the Spring of 2017, I started taking Metyrapone, a drug that is often effective in blocking your adrenal glands from producing excess cortisol even in the presence of excessive levels of ACTH. I’ve slowly increased my dose, but my cortisol test results continue to be high. In the middle of this attempt at treatment by medication, I had another MRI in July 2017. Again, the MRI was inconclusive.

This is my Cushing’s story to date, but there are chapters still to be written. I’m hopeful that some combination of medication can lower my cortisol levels and protect my health, at least in the short term, until the tumor can be located and then hopefully removed. There is also a promising drug in a late stage of clinical trials that will hopefully prove to be as effective as early studies have indicated.

But beyond these hopes related to medication and surgical treatment, I’ve grown more confident in some other sources of comfort. My wife, kids, family, and friends have shown me tremendous love and support through every stage of this Cushing’s struggle. There is great assurance in knowing that I do not fight this battle alone. And what is even more powerful for me is the assurance that God is in control and that He is working for my good in every situation, even this one. I know Jesus as my forgiver and I’ve made Him the leader of my life, so my life belongs to Him. I trust His love and I trust His plan.

In my weaker moments, I ask God “why?” Why have I needed to deal with this over the period of life that should have been my strongest and most productive? I just want to be a good husband, a good dad, a good friend, a good pastor, and I know I could do such a better job if I didn’t have this struggle, this hindrance. And I ask Him why – why did You allow this disease to come back? And so I pray for healing. I try the medications that are available, and I continue to get MRI’s at appropriate intervals, but the path of my future health is still uncertain at this point. This is one of the great challenges of Cushing’s Disease; the uncertainty.