My Cushing’s journey started many years ago. I was born in Russia, in a big city called Voronezh. As a child, I was sick a lot with upper respiratory infections and strep throat. Physically, I was much weaker than other kids my age. I also had different skin problems such as rashes and inflammations which were hard to treat. Also, when I dealt with stressful situations, like difficult exams, I became sick with flu like symptoms. 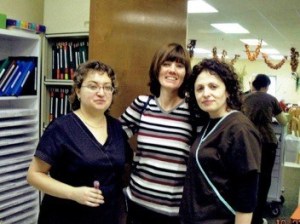 I got married at the age of twenty. In 1994, my husband and I moved to Ashkelon, Israel. I finished Bar-Ilan University and became a registered nurse. I started working in Barzilai Medical Center as an RN. When my body detected stressful situations, it immediately responded with sickness as it did when I was a little girl, but I didn’t pay much attention to it. In 1997, my son Natan was born, and another symptom arose: I began having difficulty sleeping.

In 2001, four years later, we had our daughter Sophia, and yet another symptom came up. I started to gain weight quickly, and became sick more often. My skin became very oily and I began to grow facial hair.

In 2003, I started to experience heavy headaches and stopped sleeping completely. I was really suffering, but I never went to see a doctor and I never complained to my husband. I had a stressful job, two young children and we were ready to move yet again, to America. I attributed all of my symptoms to the stress of everyday life.

In June of 2004, we moved to the United States. In January 2005, my headaches were so bad that my husband had to take me to the emergency room. My blood pressure was 200/110, and I was diagnosed with Essential Hypertension and discharged from the ER with Norvasc 5mg. After this incident, I started visiting my primary care provider often because no blood pressure medications could control my blood pressure. I felt very ill, but according to my doctor, I was healthy and just needed to incorporate diet and exercise.

I was exhausted all the time, had general weakness, and was hungry all day and night, but after I ate I felt really nauseous. I had no energy, and experienced mood swings constantly. My hair became curly when it used to be straight. I maintained a diet for years, but my stomach still looked like I was very pregnant, my arms and legs looked disproportionately skinny, and my face was very round. My concentration level decreased drastically and I had no memory at all. My blood test results were showing high cholesterol levels and inflammation in my body. At some point, I started losing my conscientiousness and these episodes became all too often. I named these episodes “storms”.

In 2008, I started experiencing these storms every other day. I was so sick, feeling extremely ill, nauseous, and weak. At some point, I understood that my problem was internal, and not due to my stressful life. I went to the doctor’s office, and told her that I feel like I’m a dead body and we need to check my cortisol level. She did a blood test and the result came back high. I felt a huge sense of relief because I finally confirmed what was wrong with me. For the next few months, I went to see an endocrinologist, and I did a lot of blood work, urine tests, CT scans, and MRIs. Finally, my diagnosis was medically confirmed that I do, in fact, have Cushing’s disease.

I have Cushing’s due to Pituitary Adenoma. I had my first surgery at Jefferson hospital on March 3rd, 2009. My neurosurgeon was Dr. Evens and my ENT was Dr. Rosen. My surgery went well, I was out of the operating room at 7 p.m. (It was from 3 p.m. – 7 p.m.), transferred to my room in the ICU unit, had some headaches, and slept through the night. On March 4th, at 6 a.m., Dr. Evans woke me up. He asked me different questions, one of them being “how do you feel?”. I was  very happy to inform him that I felt good. I had minimal headache, a little weakness, and the best feeling was sleepiness since I hadn’t slept consistently for years. I felt like my symptoms were resolved completely, but he was not happy with my answer. I saw it through his facial expression. He repeated his question, “how do you feel?”, and once again, I told him the truth, I was feeling good!

I expected him to be very happy for me. It had been only 10 hours after brain surgery and I was doing very well.

Little did I know, it was not a good sign. In a little bit, I got another surprise, the nurse brought Prednisone 5mg. I became furious, I came here to be cured and she gave me the stress hormone again. I refused to take it. Sure enough, ten doctors came in my room at once, worried that I would be dead soon if I did not take the Prednisone. Wow! When I was feeling nearly dead, they considered me to be healthy, but when I finally felt good, the doctors told me I was going to die. I didn’t believe all these doctors, and refused to take any cortisol replacement therapy. I was discharged from the hospital on the third day. I got double vision, and lost my sense of smell. Everything resolved during the first month, and I didn’t need any recovery after surgery. My body was recovering from Cushing’s and I slept for 20 hours a day, the entire month.

I was doing well for only two months, but in May of 2009, I got most of my symptoms back. I went to see my endocrinologist and again he told me that I don’t have Cushing’s, and all my symptoms were part of the recovery. In June, I saw my new endocrinologist, Dr. Snyder at the University of Pennsylvania. It took him an entire summer to believe that I do have Cushing’s by doing a lot of blood, urine, and CRH testing. In September, he agreed that I had it back (hallelujah). Although on the MRI, the tumor was not visible. He recommended the removal of my adrenal glands. I refused, and from that point on, my Cushing’s story took yet another turn.

Dr. Snyder recommended me to see Dr. Biller, from the Massachusetts General Hospital, for a second opinion. By that time, I was so sick that I stopped working and couldn’t do anything. My husband looked for an appointment and he found a medication trial which Dr. Biller and the hospital were doing. I started on Korlym in December, 2010. It was very effective, most of my symptoms were relieved, and I lost 50 pounds. However, I became so tired that I needed 16 hours a day to sleep. I was on that trial for two and a half years, and highly recommend it for others to try. The medication is now approved by the FDA, and the endocrinologists can prescribe it for Cushing’s disease patients.

After I stopped the trial, Dr. Snyder and I decided on another surgery, the resection of pituitary adenoma. In April of 2012, I was admitted to NIH for my second surgery. It was a bad decision because after the surgery, my cortisol became higher than it was before the surgery. I’m still stuck with Cushing’s. It won’t leave me alone.

At this point, Marie Conley contacted me and opened me up to people who are similar to me. I didn’t know how important it was to have people who fully understand you, and I really appreciate having our group.

Sure enough, I wasn’t done with the trials. I started on a second trial with Pasireotide. It was an injectable medication which I only needed to inject once every 28 days. On this medication my urine cortisol level became much lower, but not normal. Although some symptoms relieved, it was not good enough. After seven months, I decided to stop this medication and I moved to the third trial which I continue to this day, medication LCI699 (commercial name: Osilodrostat), which blocks the final step in cortisol synthesis. This medication is very effective and the side effects are well tolerated. I’ve been taking it for two and a half years and am willing to continue. So far, my cortisol level is normal and my Cushing’s symptoms have subsided. I still need ten hours to sleep and a nap after physical activities. The only severe problem is dealing with my memory and concentration, but I’m not sure that any other treatment for Cushing’s disease can improve it.

From everything that I’ve done through this journey, one thing I learned is to really listen to my intuition, and acknowledge that my symptoms are not normal, and need to be attended to. I hope my story helps those that do not know what direction to take because I have knowledge of many medications which treat Cushing’s disease, and this experience could be insightful for others.